On this page we will explain what your report will look like and what the information means in terms of whether or not your animal(s) will require treatment.

Here is an example report to which we have added color for explanation purposes. There is also a sample Baermann and sedimentaton result to demonstrate how those results are reported. 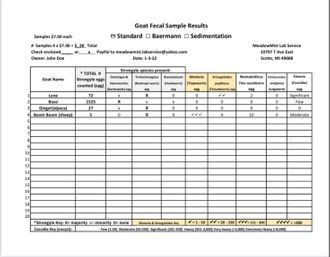 This is an example of what your report will look like when you receive your results email. 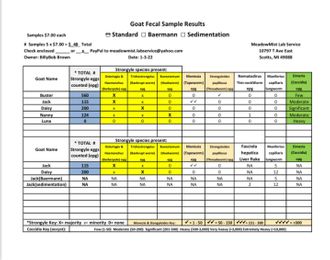 In the first column on the left (which is highlighted in blue) is the total strongyle egg count reported in eggs per gram. Strongyles are generally the species of worms that are most concerning; they consume blood, can cause anemia and death. There is no need to do any mathematical conversion to these numbers, they represent the actual result. The next three columns (highlighted in yellow) represent three species of strongyles that may be present. A capital X in bold designates the most prevalent species noted. If there are more than one species present, the less prevalent species are noted with a lowercase x. A zero indicates that none of that species was present.

The next two columns which are highlighted in peach are Moniezia (tapeworms) and Strongyloides (threadworms). If either of these species are noted there will be check marks in these columns. Refer to the key towards the bottom of the report which gives you a range of how many eggs were noted.

The final column which is highlighted in green is the level of coccidia detected. At the very bottom of the report there is a key that provides the number of coccidia within the descriptive range listed on the report. The species of coccidia is not reported as there are often multiple species within one sample. Camelids have different coccidia species than do goats and sheep.

Moving on to the lower portion of the example report, the Baermann test is highly specific for lungworms larvae. All of the other columns contain N/A because the only relevant results for Baermann tests are lungworm larvae. Similarly, the only relevant results for sedimentation tests are lungworm larvae and fluke eggs so the other columns are NA. Notice the column labeled Fasciola hepatica. Any standard or Baermann samples should have NA in this column because fluke eggs will not be detected with standard or Baermann tests.

All Strongyles are not created equal

Here are some things to know about strongyles. 1) The first column is for both Haemonchus contortis (barberpole) and Ostertagia (brown stomach worm). We are unable to make a determination on these 2 species. One clue is that Haemonchus can produce 10,000 eggs per day while Ostertagia are not prolific egg producers. Both consume blood and live in the abomasum. Both are treated with the same anthelmintics. 2) The second column is for Trichostongylus (bankrupt worm) which also consume blood and spend part of their life cycle in the abomasum. Trichostrogylus eggs are larger and slightly different shaped which is how we can identify them. They are relevant because they are not prolific egg layers, laying only up to 100 eggs per day. For this reason, an egg count of mainly Trichostronglus eggs equates to more actual worms present. It may be necessary to treat for lower egg counts than if it was a similar number of predominantly Haemonchus eggs.

3) The third column is for Bunostomum(hook worms). These worms can infect an animal by skin/hoof penetration or by ingestion They migrate to the lungs for further development and are then coughed up and swallowed to begin the next life stage in the digestive tract. The eggs of Bunostomum are significantly larger than Haemonchus eggs and slightly differently shaped than Trichostrogylus. Because of the lung stage, Bunostomum are also known for producing a cough in the same manner as lung worms. They can cause skin lesions or hoof problems due to penetration. Bunostomum live in the small intestines and are not prolific egg producers- symptoms may be noted from relatively low egg counts.

Moniezia spp are the tapeworms of ruminants. They live in the intestines and absorb nutrients of the animal. They are not particularly dangerous because they do not consume blood as do most other parasites. The primary host of Moniezia are tiny soil mites which become infected by consuming eggs released in feces. The Moniezia develop in the host and infect ruminants that consume the soil mites while grazing. Tapeworms are treated with anthelmintics such as Valbazen (not for use in pregnant animals), Fenbendazole (Safeguard), and extra label by the compound Praziquantel found in some horse dewormers.

Strongyloides papillosus (threadworms) are small worms that can enter the body through the feet, skin or the mouth. Once in the body they migrate and can be found in the blood vessels, lungs, trachea and small intestine. They also can migrate to the placenta and are the only worm that can be transmitted directly to a developing fetus. Females migrate to the intestines to lay eggs. Strongyloides can cause weight loss and diarrhea as well as foot lesions that are resistant to healing. They can also cause considerable lung damage in young animals. Treatment for Strongyloides should consist of a systemic anthelmintic such as a pour on or an injectible to kill the migrational forms.

Cooperia spp are species of roundworms that infect the small intestines in ruminants. They do not consume blood but cause intestinal damage by burrowing into the intestinal walls. The primary symptom of cooperia is diarrhea, especially which cannot be attributed to other causes.

Capillaria (hairworms) are small worms that have eggs similar to Trichuris eggs. They do not generally cause any symptoms and are not normally treated.

Trichuris ovis (whipworms) are small worms that live in the cecum of small ruminants. Except in heavy infestations, they are considered fairly harmless in sheep and goats and it is not generally necessary to treat them for Trichuris. Camelids in contrast can be adversely affected by Trichuris with symptoms being slow growth, diarrhea and blood loss.

Nematodirus (thin-necked worms) are worms that live in the small intestine and consume the intestinal lining. They are especially dangerous in young lambs who may die before eggs can be detected. Signs of Nematodirus are diarrhea, especially in lambs, and general unthriftiness. The eggs are very large and exceptionally hardy, remaining viable through the winter. They frequently emerge in the spring at the time when lambs are most susceptible. Nematodirus infections are treated with the same anthelmintics used to treat strongyles.

There are many strains of eimeria (coccidia) sheep and goats sharing the same ones, camelids having their own species for the most part. Coccidia strain identification is certainly possible but is not within the scope of our normal standard test. If there is a need to identify coccidia strains, please let us know on the sample submission form. Coccidia are problematic for the most part in young animals. They cause anemia and can cause permanent intestinal damage as well as death.There is a school of thought that indicates that coccidia are not problematic in the absence of diarrhea. We have seen multiple customers lose animals with very heavy coccidia counts but with normal stool. Treatment is recommended for any result of "heavy" or greater. Young animals begin to develop an immune response to coccidia usually around 6-10 months. There does have to be some coccidia present in order for this to occur. Animals at a "significant" level do not usually require treatment unless they are young kids. They should be monitored closely to ensure they are not becoming anemic, an indicator the coccidia levels are increasing. Adults that are under stress such as from kidding, illness or changing herds are susceptible to coccidia flare ups and should be treated if this occurs at the "heavy" level.

There are 2 main strains of lungworms affecting small ruminants: Muellerius capillarius and Dictyocaulus viviparous. Both strains are identified by using the Baermann technique and both strains are treated with the same anthelmintics. We will report which strain(s) are identified. Lungworms often cause intermittent coughing with no other symptoms. They can cause emphysema, pneumonia, and scarring of the lungs. Treatment is recommended if lungworms are detected.

Fasciola hepatica are liver flukes which can be detected via the sedimentation test. Hepatica have an intermediate host of snails so are most common in wet areas. Symptoms of liver fluke infections can include abdominal pain, poor appetite, jaundice, and ill thrift. Flukes should be treated if detected.

When is treatment recommended?

In general treatment is recommended for any of the following :

1) Total strongyle count greater than 500 epg for sheep and goats. Llamas may be able to handle a litle higher number, alpacas may need to be dewormed for a slightly lower number. It is especially important to use FAMACHA checks in determining whether to deworm camelids or not.

2) Coccidia levels of "Heavy" or greater

Treatment may be indicated for:

1) Trichostrongylus count of 250 epg or greater. Treatment should be based on FAMACHA score in tandem with fecal egg count

2) Nematodirus egg counts greater than 10 epg. Treatment at this level to prevent egg shedding as eggs can be viable as long as 2 years. Nematodirus eggs detected in camelids should be treated as they are especially dangerous to crias.

4) Cooperia when suspected cause of diarrhea or > 25 epg

When not to treat?

Treatment is not recommended for low strongyle egg counts. Remember, the goal of parasite management is to sustain the health of your herd, not to kill every worm. FAMACHA techniques should be used in tandem with fecal egg counts.

Treatment for tapeworms is up to the individual. Tapeworms are gross but are not especially harmful to the animal . An exception to this would be an animal in poor general condition. The downside of treating for tapeworms is it increases exposure of anthelmintics to other parasites, thus increasing the potential for creating anthelmintic resistance.

Each farm develops its own ecosystem of parasites; what works for one farm might not work at all for another farm. Current research advises determining what works on your farm and sticking with it for as long as it still works. Rotating dewormers creates broader resistance. It has been demonstrated that anthelmintic resistances will disappear over a period of 3 years if there is no exposure during that time period.

How to determine efficacy? Send a sample for standard testing 10-14 days post treatment. It is not necessary to send fecals for all animals treated, the point is to determine the percentage of decrease in egg production. If there is not a significant decrease then resistance is indicated.